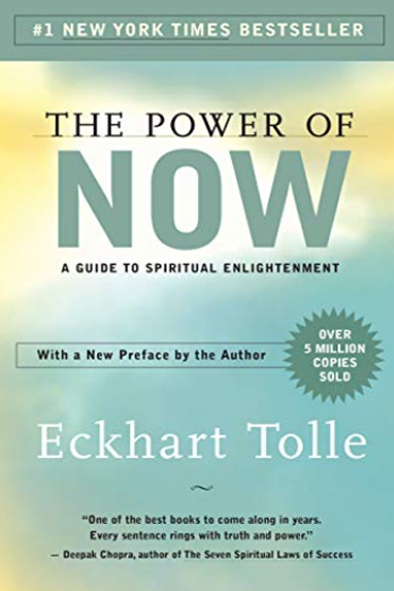 The Power of Now

Every sentence rings with truth and power – Deepak Chopra

To make the journey into the Now we will need to leave our analytical mind and its false created self, the ego, behind. From the very first page of Eckhart Tolle’s extraordinary book, we move rapidly into a significantly higher altitude where we breathe a lighter air. We become connected to the indestructible essence of our Being, “The eternal, ever present One Life beyond the myriad forms of life that are subject to birth and death.” Although the journey is challenging, Eckhart Tolle uses simple language and an easy question and answer format to guide us.

A word of mouth phenomenon since its first publication, The Power of Now is one of those rare books with the power to create an experience in readers, one that can radically change their lives for the better.

One of the best books to come along in years. Every sentence rings with truth and power. – Deepak Chopra

I heartily recommend this profoundly inspiring book to all seekers today. – Lama Surya Das, author of Awakening the Buddha Within –This text refers to an alternate kindle_edition edition.

Eckhart Tolle was born in Germany and educated at the Universities of London and Cambridge. At the age of twenty-nine a profound inner transformation radically changed the course of his life. The next few years were devoted to understanding, integrating and deepening that transformation, which marked the beginning of an intense inward journey. Later, he began to work in London with individuals and small groups as a counselor and spiritual teacher. Since 1995 he has lived in Vancouver, Canada.

Eckhart Tolle is the author of the #1 New York Times bestseller The Power of Now ‘translated into 33 languages’ which is widely regarded as one of the most influential spiritual books of our time.

Eckhart’s profound yet simple teachings have already helped countless people throughout the world find inner peace and greater fulfillment in their lives. At the core of the teachings lies the transformation of consciousness, a spiritual awakening that he sees as the next step in human evolution. An essential aspect of this awakening consists in transcending our ego-based state of consciousness. This is a prerequisite not only for personal happiness but also for the ending of violent conflict endemic on our planet.

Eckhart is a sought-after public speaker and teaches and travels extensively throughout the world. Most of the teachings are given in English, but occasionally Eckhart also gives talks in German and Spanish. In addition to The Power of Now, Eckhart has written a book designed for meditative reading entitled Stillness Speaks. A book consisting of selections from The Power of Now is also available, entitled Practicing the Power of Now.

–This text refers to an alternate kindle_edition edition.

The international bestselling phenomenon that has inspired a generation –This text refers to an alternate kindle_edition edition.

“The Power of Now is one of the best books to come along in years. Every sentence rings with truth and power.” –This text refers to the paperback edition.

World-renowned spiritual teacher Eckhart Tolle conveys simple wisdom that transcends any particular religion, doctrine, or guru. His #1 NYT bestselling book is a modern classic in the field of personal growth and spirituality; Oprah Winfrey credits The Power of Now with helping her to “get through September 11, 2001” and she featured it on her December 2002 “Oprah’s Favorite Things” show. A native of Germany, Eckhart Tolle attended the University of London, and upon graduation went on to become a research scholar and supervisor at Cambridge University. At 29, a profound spiritual awakening virtually dissolved his personal identity and sparked a radical change in the course of his life. It marked the beginning of an intense inward journey and he devoted the next decade to understanding, deepening, and integrating that transformation. For the past ten years, he has acted as a counselor and spiritual guide, facilitating sold-out groups in Europe and North America. He lives in Vancouver, British Columbia. –This text refers to the paperback edition.