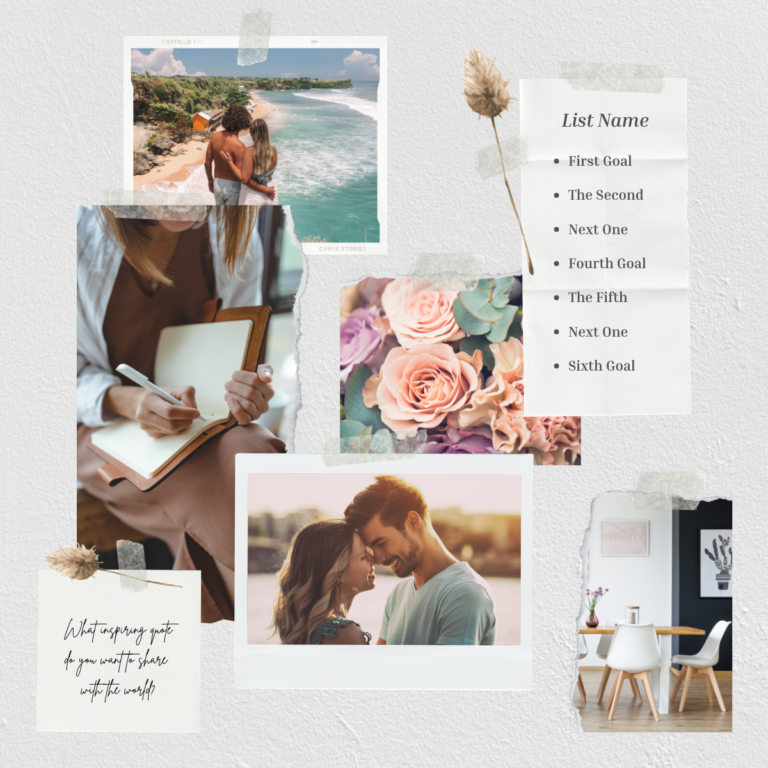 A question often asked is ‘Do Vision Boards work?’

I created my first Vision board about 20 years ago. At the time, I had no money, was sharing a house with some very nice people, had an old Honda car (which I loved) and was just starting a new relationship. So I was a happy, positive person but was living a very economical life 🙂

At the time, something was telling me to create a Vision Board… call it the universe or call it the power of media suggestion because, I’d watched someone chat about them on TV, I’d seen an article in a magazine, and then… a taxi driver told me to create one  (I know… That was pretty random!”

So I decided that if I was going to create a Vision Board, and if that board was representing a make-believe future, then I should dream up the most amazing, imaginary life I could think of.  Because, let’s face it, if it’s not real then you can dream BIG.

So I sat at my computer and started to put words into the search bar of my Google images search engine.

Any image that called to me… Fabulous Cars, Beautiful Houses, Romance, Wealth, Self-love, New Confidence, Friendship, Family, Cute Animals… I actually had great fun choosing pictures from the web of things that grabbed my attention. All of the images that I saved, I put into my photos folder on my phone and each day I looked at them….

And then some interesting things happened…

Within a month, I met one of my neighbours whom I had never met before. It was a funny story actually, because I found a pile of ‘Poo’ at the door of my house. And, as she was the only neighbour I’d ever seen with dogs in the area, I went and knocked on her door and asked if her little dogs were the culprits?! Turns out that it was an urban fox but she and I became very good friends.

The following week, she asked me would I like a Sports Car, for the weekend, for free! …. Seriously!! Now it was just for the weekend, but obviously I jumped at the chance. Apparently, she worked for a car company and her boss was bored of his 3 month old Sports car. I borrowed it and loved it. Then she said her boss wanted to sell it and would happily give it to me at a ridiculously reduced price if I was interested.

Now I couldn’t afford a sports car, no matter how cheap the price, but I told my new boyfriend about it  (Don’t worry, I wasn’t asking him to buy it because he couldn’t afford it either) But he said to me,  “Why not? You were thinking of starting a new business, so maybe you’ll have more money and if you get really stuck you can always sell it at a profit.” He also said that if I was stuck, he might be able to help in some small amount of cash. I thought that was incredibly generous, what a nice person, but I also knew that I would never ask for money, it’s not the way I operate. But guess what… I bought the car.

I threw myself into the new business to be sure that I could pay for it and it became very successful. Today I’m living a beautiful life very similar to my Vision Board. A beautiful home, two cats, a successful business, nice holidays, great friends, I’m closer to my family and I’m still with the boyfriend, whom I adore.

Was it ‘The Magic of the Vision Board’? Or was it that I began to imagine a different future for myself ?

The reality is that the Vision Board helped me to state my intent for my life, hold the focus on that intention and be more open to new opportunities. so in many ways I created my own magic and that’s more powerful than anything else.

The Girl with the Corkscrew Hair